This area is truly an undiscovered gem amongst Slovenia's attractions

Chances are, one of the first things you heard about Slovenia was how beautiful Lake Bled is.  And it’s also likely that, even if you’ve been to Lake Bled, you have still never heard of Bohinj.  Until a few days ago, I could only claim to know of Bohinj second-hand, from friends who had been there and returned with wonderful stories about the crystal clear lake and the gorgeous mountains that surround it.  Now that I have gone and seen it for myself, I can say with firm conviction that the stories are true: this area is truly an undiscovered gem amongst Slovenia’s attractions.

Just a two-hour bus ride northwest of Ljubljana lies one of Slovenia’s best kept secrets.  Nestled amongst the towering stone giants of the Julian Alps laps the country’s largest permanent lake and an exciting feature of Triglav National Park: Lake Bohinj.  Although it is a popular summer destination, offering much-needed respite from the August heat, the lake’s size is so accommodating that you can easily find a secluded spot and imagine that you have the lake all to yourself.

The lake itself, its emerald water fed by mountain rivers and streams, is a few degrees colder than Slovenia’s other popular lakes, but this is by no means a deterrent.  Families, couples and groups of friends all make their way to its shores, stepping lightly across the pebbled beach and easing into the refreshing chill to restore their sun-weary bodies with a swim.  And when they emerge, the sun is there to greet them again, and in no time they are dry and warm once more.  It is a dance worth watching, but it’s even more fun to join in.
Whether your heart is set on swimming, having a picnic or simply unwinding with a good book, Lake Bohinj is a destination all its own.  There are more Slovenia sights in this region than merely its mesmerizing lake, however.  The awe-inspiring mountains that hang overhead, tearing the sky with their mighty peaks, beckon the nature-lover onward and upward to one of the many hiking trails that wrap their way through stone forests and around wind-gnarled pines.  And as with many things, it is the journey there that is perhaps the most memorable. 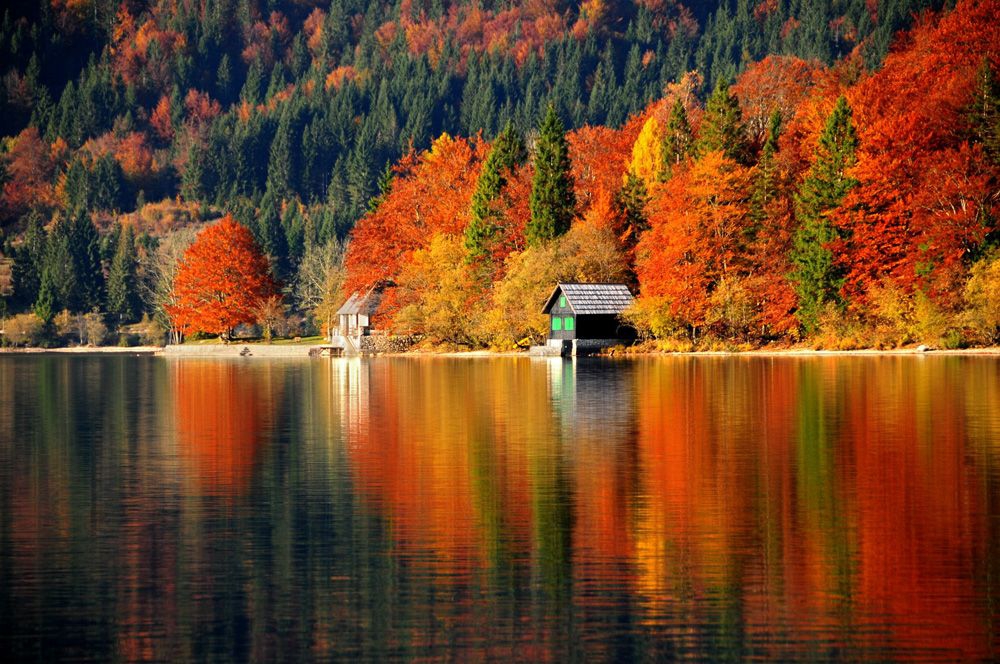 Ascending Mount Vogel, a favorite ski destination in winter, can be done even in the summertime by means of an enormous gondola.  Lest you think that this might rob you of a thrilling hike, allow me to allay your concerns and assure you that there is plenty of exciting terrain left for you to tackle once you reach the docking station.  And besides, the view along the way is one that you won’t get any other way unless you parachute back down (which is also an option, but don’t forget to bring a parachute).

The gondola runs every half hour during the high summer season, and it is worth the wait and the €5.50 ticket price.  Swinging lightly on its cable ride heavenward, the gondola affords its passengers a treat that only the winged could otherwise enjoy.  Rising up out of the valley, you watch the folds of forest robes ascend the foothills around you, gradually thinning out and providing less cover until a few patches of hardy, stubborn trees are all that remain to hide the mountainside from curious eyes.  Climbing higher, you begin to feel that you are soaring along with the birds that you spy around you, wondering if they are jealous that you share, if only for a moment, a domain that until so recently belonged solely to them.
Alighting once more, now high above the shimmering lake, the trails call you to join them for a romp around the alpine peaks.  They are guarded, however, by hungry local creatures that will not let you pass without inspecting you and your belongings.  There is no cause for alarm, though, for they are only friendly goats.  My bag of food caught their attention immediately, and several wandered over to see if they could entice me out of it.  This was not to be, but as I petted one I received a lick of approval nonetheless.  It tickled a bit, and I giggled like a child.  Goats are fun.
Trails lead off in many directions, providing hours of hiking for the intrepid wilderness enthusiast.  For the peak-bound and the short of time, there is also the option of taking a ski lift closer to the top, which is precisely what my friend and I did that day.  The lift ride has its own advantages, much as the gondola does, and the traveler is granted a more personal, open-air view of the mountains that surround them.  It is almost impossible, given the mode of transportation, not to imagine the slopes below draped in snow and populated with skiers, but the mountain’s true face in no way fails to impress. 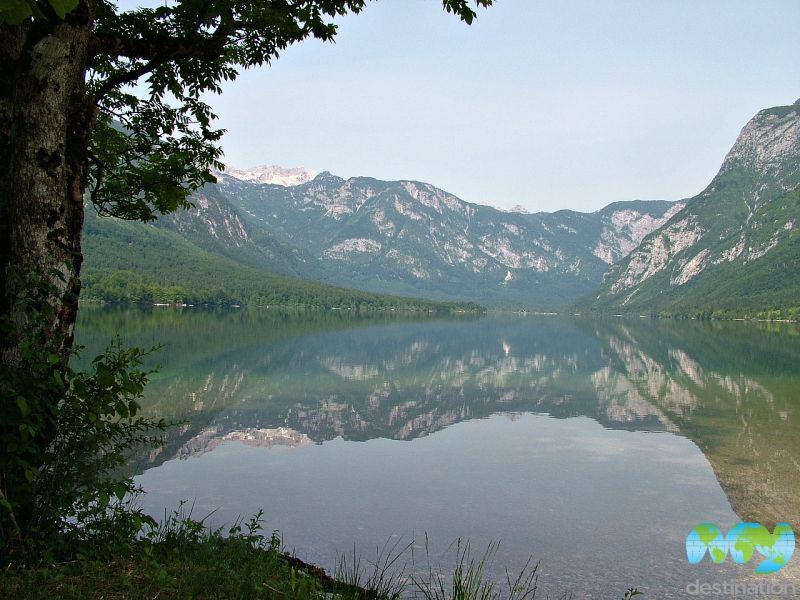 Hiking up to Vogel’s peak still takes an hour or so from the end of the ski lift, and my friend and I simply did not have enough time that day to complete the journey.  I look forward to returning sometime and making it the rest of the way, but the lower lookout points provided so many breathtaking vistas that I was by no means disappointed. This is one of the best views in Slovenia  From one spot you can survey the surrounding mountains and the valleys below, pretending for a moment that you are floating above it all rather than rooted to the ground.  And off in the distance, winking out of the north, is Triglav, Slovenia’s highest peak.

I must now share with you a special moment that occurred on the mountain that day.  Descending by foot and making our way back to the gondola station, my friend and I were witness to two male goats fighting for dominance.  Their great horns clashed in battle as they squared off for the right to mate and pass on the gift of life.  At one point, the horn of one goat was caught under the collar of the other, and the struggle took on very different stakes.  Scared and confused, the two fought to free themselves, and for a while it appeared that the one would end up choking the other.  Finally, the horn slipped loose and the two broke away, but only seconds passed before the fight began anew, and the horns cracked together again and again.
As we made our way down the mountain, back on the marvelous gondola and down to the emerald lake below, I contemplated what I had just seen.  It seemed easy enough to dismiss this behavior as the irrationality of low beasts, unaware of how close they had come to killing each other and interested only in proving superiority once and for all.  Certainly there had to be more to it than that, I imagined.  It was not until I watched the brown-skinned creatures of my own species down by the water that I found my answer. 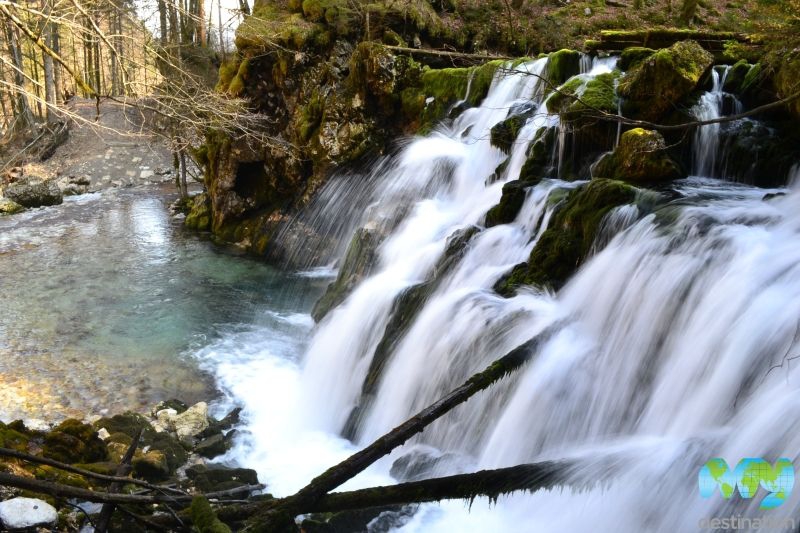 The lake is cold, and the initial probing of its mirror surface leaves the newcomer reluctant to go much further.  But most choose to continue and quickly find that once inside, the temperature is not so bad after all, and the body adapts quickly to make the swim an exceedingly enjoyable one.  The memory of the unpleasant first steps has faded, replaced with the wonder of twirling about in semi-weightlessness.  Emerging, the hot sun licks the drops of water from their bodies, and soon they are warm and comfortable once again.  After a time, though, those piercing rays have become too much and the water begins to look more inviting.  The shock of the cold entry will be just as intense now as it was before, but it does not deter the water lover from taking another dip and discovering the pleasure that comes once that pain has abated.

Watching children and septuagenarians alike moving back and forth from beach to lake was when I began to understand the highland goats.  The silly humans plunged themselves into the freezing water but found that discomfort temporary and ultimately meaningless.  Then the sun called to them and they emerged, wet and shaking in the wind, and no sooner were they dry and warm again than it became too hot and they braved the fearsome chill once more.  They were not ignorant of the cycle, of the discomfort that they would feel by choosing one and then the other, they simply did not care.  The reward was worth far more than the price.  I smiled as I watched these wacky creatures go in and out of the water, enjoying their lives and the memories that they were making.  It is a dance worth watching, as I said before, but more important to remember is that it’s even more fun to join.
Explore more of Slovenia – connect with us on Facebook!
Article written by freelance writer Peter Woods.
Written by:
PUBLISHED: Jun 9th 2017