The Warrior Poets of Ljubljana

When I first came to Ljubljana, Slovenia’s capital city, I was overwhelmed by the city’s striking beauty.  The Ljubljanica River carves its lazy path through center and suburb alike, passing many of the top Slovenia attractions.  Gorgeous baroque and classical buildings nestled in the old town follow the river’s curves and shelter elegant restaurants, myriad cafés and pubs, and endless shops to meet any taste or need.  The streets wind their way whimsically through the center, as if they have minds of their own, and marching out from all sides are narrow, cobblestone alleyways that beg you to uncover their secrets.

Churches of all orders toll the hour and stand regally in honor of the country’s Catholic heritage, while countless bridges span the river, providing this place not only with beautiful vistas of the city and the Ljubljanica, but also with a sense of unity, a harmony that bonds the ancient with the modern.  Above it all towers the Ljubljana Castle, waving the dragon flag of Slovenia’s capital and overseeing all that transpires in the little gem that it guards both day and night.  Truly, there is a magic that resides in this city that is evident from the moment you arrive.  All of this alone would be enough to make the city of Ljubljana a unique and wonderful place to visit, but this town has more to offer than what might catch your eye at first glance.
Imagine your first sip of a fine wine.  Before you even bring it to your lips you have probably noticed the enticing aroma and smiled at the way the deep, red liquid clings to the edge of the glass before climbing back down again.  And that sip, once you take it, fills your mouth as you roll it over your tongue and taste the grape-fermented wonder that has been prepared for you.  You revel in the delicate, fruity tones that begin to emerge and discern a hint of wood that comes from the barrel in which it was born.  It is marvelous, and yet there is much more.
As you sip it again, perhaps over a delicious meal looking out on the lights of Ljubljana, you are met with new surprises.  The wood, you are now certain, is oak, and the interplay of chocolate and cherries is evident on your tongue.  A rich, earthy quality reveals itself, and a slight tang of spice bites your tongue as you consider the depth and intricacy of the flavors that rise and fall with each sip that follows.  This, my friends, is Ljubljana, for its true mysteries lie in its subtlety. 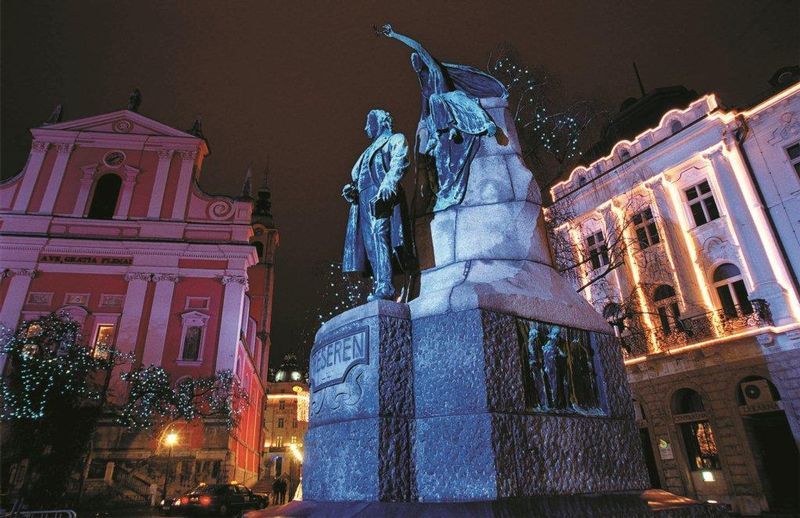 A stroll through the streets of most European capitals will soon leave you with the impression that you are not alone.  The stony eyes of local heroes, immortalized in bronze and stone, keep watch over their patron cities and bedazzle residents and tourists alike with their evocations of history and culture.  Ljubljana is rich in these hallmarks of past greatness, and it is difficult to walk far in this town without meeting the gaze of several of these frozen watchmen.  What distinguishes Ljubljana from most other European cities of note comes only with a moment’s reflection, however.

Take the time to contemplate these must-see statues and the people they represent; think on the contributions made by these individuals to Slovenia and her people, and you will soon discover a trend that is most unique.  Whereas most cities are bulging with kings and warriors, honored princes and priests who defended the towns and the borders and preserved the way of life of the people there, in Ljubljana you will find a preponderance of scholars and rulers of the written word.  Poets, linguists and writers populate Ljubljana’s gallery of heroes, and they are all here for you to enjoy.
Cross over Tromostovje, the Three Bridges in the center of Ljubljana, and you will find yourself in Prešeren Square.  The statue of France Prešeren, immortalizing Slovenia’s national poet in bronze, depicts him standing proudly and staring out at the square and the people passing by.  Some stop and stare back, lines of his poetry memorized in school doubtless on the tips of their tongues.  Writing in the early 19th century, the dawn of the Slovene literary tradition, Prešeren is said to have inspired virtually all Slovene literature since that time.  He is considered one of Europe’s greatest Romanticists, and his works have been translated into numerous languages.  To have such a patriarch depicted standing on his own would not be enough, and so it is that we see a muse hovering behind him, holding a laurel above his head to remind all that somehow might not yet know that this was a great man.
Taking leave of the esteemed France Prešeren and stepping respectfully behind his monument, you will find yourself on Miklošiceva cesta, which will soon lead you to a small park known as Miklošicev Park.  Both are named for Franc Miklošic, the renowned philologist of the mid-19th century. Although he is remembered for contributions in several areas of linguistics, he is primarily known for his scholarship as a Slavic linguist, or Slavist.  Miklošic was also a staunch supporter of the Slovene national movement that called for a United Slovenia during the upheaval of the Spring of Nations in 1848. There is a fitting monument to the man that can be found in the park that bears his name. A bust of Miklošic rests atop a throne-like setting, where a maiden reaches up as if to adorn him with the carved laurel that is set into the stone. Below are the words Veliki Slavist, or ‘The Great Slavist’.
Heading west from here will take you toward Tivoli Park, Ljubljana’s largest.  After you have wandered the grounds and hiked in the woods, taken in Tivoli Castle and perhaps explored the Museum of Contemporary History at the Cekin Mansion, make your way to a smaller but no less worthy object of interest. A statue of Primož Trubar, the father of the Slovene language, stands leaning out over a patch of beaming tulips, steadying himself against what might be a pulpit as if preparing to give a sermon. This would surprise no one who knew him in the 16th century, as Trubar was a Protestant preacher. He is better known today for being the author of the first two books ever printed in Slovene (Catechismus and Abecedarium), as well as the man responsible for consolidating the Slovene language itself.  The tranquil and peaceful way that Ljubljana has depicted him shows that he will never be forgotten here. 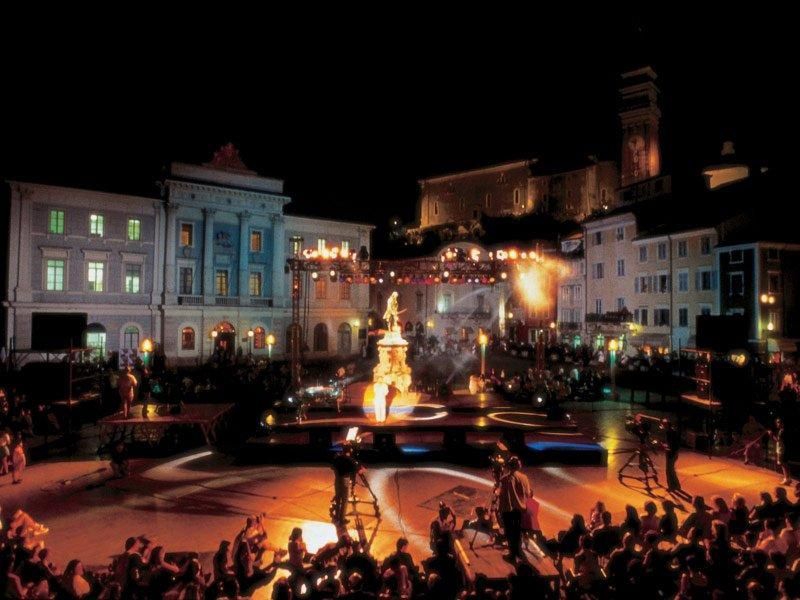 It was not until I was having a drink with some Italian friends who were visiting Ljubljana that I ever wondered to myself just why my lovely adoptive city was so different in this way, celebrating letters over military conquest. My friends had noticed this distinction themselves, and one of them asked me about it.  ‘In Italy,’ she began, ‘you always see statues of soldiers and kings and memorials to battles, but here we have seen mostly statues of writers and poets. Why is that?’ I took a moment to ponder this insightful question, and when I gave my answer I was not certain that it was true, but I knew that it summed up one of the things that makes Slovenia special in my mind.

I told my friends that Slovenia, unlike its neighboring countries, does not have much in the way of past military or political greatness to revere.  There was never a Slovenian empire or kingdom, and until twenty years ago there had never even been an independent Slovenia.  In fact, the country today is relatively small, and some might wonder just what it is that sets it apart.  One answer, and to my mind a very important one, involves the language. Slovenia is a land so mountainous that speakers of the Slovene language have historically been isolated from one another, leading to the development and preservation of nearly 50 dialects among the roughly 2 million speakers of Slovene.  That a nation with such linguistic divisions could stand together as one people would be hard to believe if it were not for the literary language for which we have Primož Trubar to thank.
Viewed in this way, the intervening years since Trubar’s time, with the many great contributors to Slovene language and literature, have seen a series of victories for Slovene unity.  Although surrounded on all sides by larger countries with more illustrious military histories, it is the language of Slovenia that differentiates this nation and makes it its own.  Slovene is already distinct from Italian, German and Hungarian by the mere fact that it is a Slavic language, vastly different from those other three in terms of vocabulary, sentence structure and word formation.  Yet even its linguistic affinity with Croatian is tempered with archaisms and borrowings from Italian and German that render Slovene truly one of a kind.
This is a fact of which Slovenes themselves are proud.  Many of the conversations that I have observed among Slovene speakers turn on the subject of regional dialects, people from the north trying out the idiosyncrasies of their friends’ seaside dialect and vice versa. Jokes are told that require an understanding of at least one other dialect, and many of my friends adopt the accent of a favorite Slovenian region to augment their conversations when they get together.  Despite these variations, however, Slovenia has a literary tradition which each Slovene speaker can enjoy and look to as their heritage.  It is this language that truly brings them together and makes them one people. 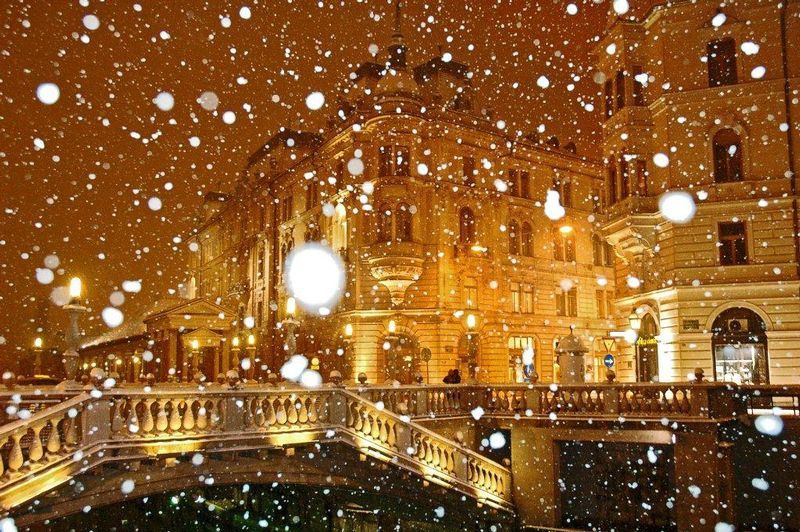 Although France Prešeren did not wield a sword or lead an army, his words captured the hearts and minds of his people and continue to do so today.  Franc Miklošic might not have ordered troops into battle, but his linguistic theories revolutionized the study of Slavic languages, and he used his prestige as a linguist to fight for the rights of the Slovene nation.  Even the great Primož Trubar never united his people under a flag, but the language for which he was responsible has been a banner under which Slovenes have rallied for nearly five hundred years.

How is it surprising, then, that the people of Ljubljana look for heroes and find poets, writers and linguists?  These were warriors in their own right, fighting for identity as much as independence, and the tradition that they inspired lives on even now.  As Ljubljana continues to flourish over the coming years, we will surely find many more statues that grace the parks and plazas of this breathtaking city, and many of them will bear the names of those soldiers of the written word who continue to inspire their fellow citizens through the Slovene language today.
Explore more of Slovenia – connect with us on Facebook!
Written by:
PUBLISHED: Jun 9th 2017